Last 15th of December the Marine Technology Centre (CTN) organised the third Consortium progress meeting of DEMO-BLUESMARTFEED Project in Piscifactorías Albaladejo facilities. The event was hold in a remote and situ manner due to availability of the attendees for travelling.

Before the beginning of the meeting, an on-board visit to Piscialba took place to show real time SICA performance.

SICA monitoring during feeding process was carried out to show its functionally not only to all the consortium but also to the “7RM” regional TV and “La Verdad” newspaper.

Furthermore, commercial SICA recently designed and manufactured was shown during the demonstration on board. Latest design will be deployed in January 2022 in Piscialba and Plagton facilities. By that time, the nine months project extension recently granted by the European Commission will be starting to amend the delays generated by the Covid pandemic situation. In this period, it will be possible to fully implement the work plan and to properly communicate, disseminate and exploit the project results.

After the on-board visit, the Consortium progress meeting took place and Noelia Ortega, as project coordinator, briefly explained the project overview and the current situation.

Ivan Felis, as R&D Manager, explained algorithms improvements for the SICA standardization and results of last monitoring phase were shown regarding the fish activity and the waste of food detected contrasted with underwater cameras monitoring.

The current status of the SICA devices deployed both case of studies was reviewed by Ana Juan as researcher in the project. In addition, Camar gave its feedback regarding the new Commercial SICA recently manufactured.

Later on, Noelia Ortega continued the meeting by presenting the different business strategies selected to test in SICA commercial validation and explained how they were expected to be tested. Feedback from the status of Spanish aquaculture sector was received from the partners.

Finally, exploitation, communication and dissemination tasks were summarized and upcoming actions with media were exposed for wrapping up the meeting. 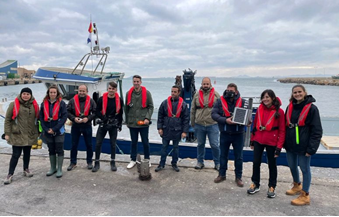